When the crown of the Chopin Op.10 No.12 timepiece is wound, the two barrels, effectively the model’s fuel tanks, harness the kinetic energy of the winding stem rotating. If all of this energy is released at once, the hour and minute hands would frenetically rotate and some parts would be damaged owing to excessive force. Moreover, the stored energy within the barrels would quickly dissipate. It’s both the gear train and the regulating organ which manage the release of energy from the barrels and control the ‘flow of time’.

The behaviour of the regulating organ is critical to precision. In particular, the balance wheel and the hairspring dictate the tempo of the watch. If they are not optimally set up, then the accuracy of the watch will be compromised.

It may sound obvious, but for a watch to display the correct time, the various movement parts must work in concert, moving precisely and to specification. If the parts don’t sing sweetly, then the performance will be impaired.

Vincent Corver, an ambassador of Chopin Watches, is a musical genius par excellence. A consummate pianist, composer and producer, his work has attracted worldwide critical acclaim. One of his arrangements has even been nominated for a Grammy.

At first glance, Chopin Watches’ association with the revered musician may seem strange, however, his life’s work has been based on understanding timing and the importance of hitting notes with absolute precision. Suddenly, the commonality between both domains seems obvious.

As a self-proclaimed horophile, obsessed about ‘rate accuracy’, ‘amplitude’ and ‘beat errors’, I wondered if Vincent could provide an insight into his world and explain what precision means to him.

In conversation with Vincent Corver

Angus: At what age did you start playing the piano?

Vincent: I started playing the piano at the age of 6. My mother received a piano as her wedding gift several years before and she could play quite well, so it felt only natural for me to start playing.

A: What are your earliest recollections of music? Can you remember the piece in question?

V: Oh yes, I have many fond memories of my first piano teacher. He was a lovely old man who was perhaps not the greatest pianist himself, but taught me the joy of music making without applying pressure from early on. The logic of practising the piano always felt quite satisfying to me and I have many great memories of some wonderful pieces even from a young age.

One of the greatest turning points was the moment I started performing modern, 20th century piano works from the age of 12 at the Conservatoire of Music, which gave me a feeling of being more distinguished as a young performer. It also came with the wonderful ‘bonus’ that many listeners simply enjoyed my performance, rather than providing a ‘critical opinion’. I suspect this is owing their unfamiliarity with the pieces I would chose to play. It allowed me to feel more free and secure. One of the pieces which had a profound impact on me was the Sonatina by Soulima Stravinsky, Igor Stravinsky’s son, whose work I have performed for many years. 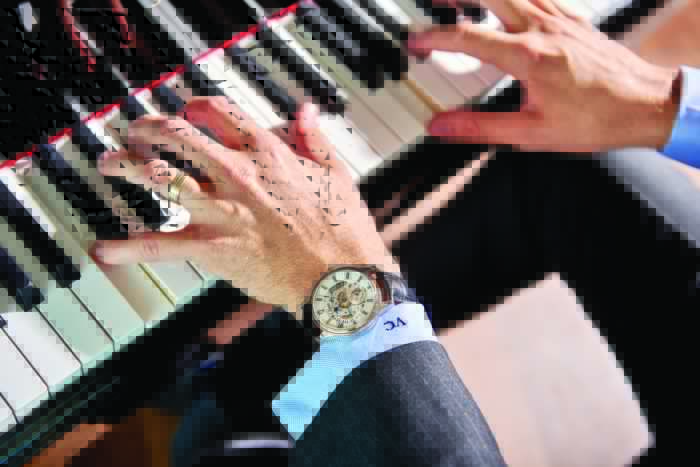 A: In watchmaking we often say that the prerequisites for success are patience, good hand-eye coordination, excellent eyesight and steady hands. What are the inherent qualities needed to be a remarkable musician?

V: That is really beautifully said. Every musician should frame this sentence and put it over their bed. Perhaps the eyesight isn’t as vital for musicians – but everything else is absolutely true for musicians as well. A remarkable musician must be someone who is kind and joyful, a great communicator, who loves being inspired and loves to inspire. Someone who understands the infinite colours of music, is a fearless performer, understands how to tell excellent stories and treats their own music as an ever-evolving universal type of communication.

A: While Chopin Watches is inspired by one man’s work, you have demonstrated a diverse array of tastes. In particular, you have wholeheartedly embraced the worlds of club music and music festivals such as Creamfields and Ministry of Sound. When did you ‘cross over’ into these genres of music and what inspired you to do so?

V: It was the week I arrived in London, sitting in my small room. I had just started my Masters at the Royal Academy of Music which left me only two years to complete my studies. It was a daunting thought. I would have to find my way in the music industry, all by myself. With this came a somewhat morbid yet profound vision: If I ever die, they’ll write on my gravestone “But he could play the piano very well”. It was at that moment I realised I needed to find new ways forward by creating my own music and coming up with new ideas, including crossover collaborations that were unique, allowing me to differentiate myself from other pianists.

A: I was fascinated to read that you have also written many film scores. Does this necessitate a different approach to composing piano music? Do you always have the opportunity to see the film prior to composing the soundtrack?

V: I don’t really subscribe to one approach when processing my compositions. In some cases I have completed the music even before the film has been made. Conversely, sometimes I have to meticulously score a film that has been fully completed. I always try to understand the wishes of the client and elevate it to something that is beyond their expectations. It can be a bit of a back-and-forth process in some cases, other times the client loves my work instantly and there are no further required changes from the original score. Those are the memorable days. 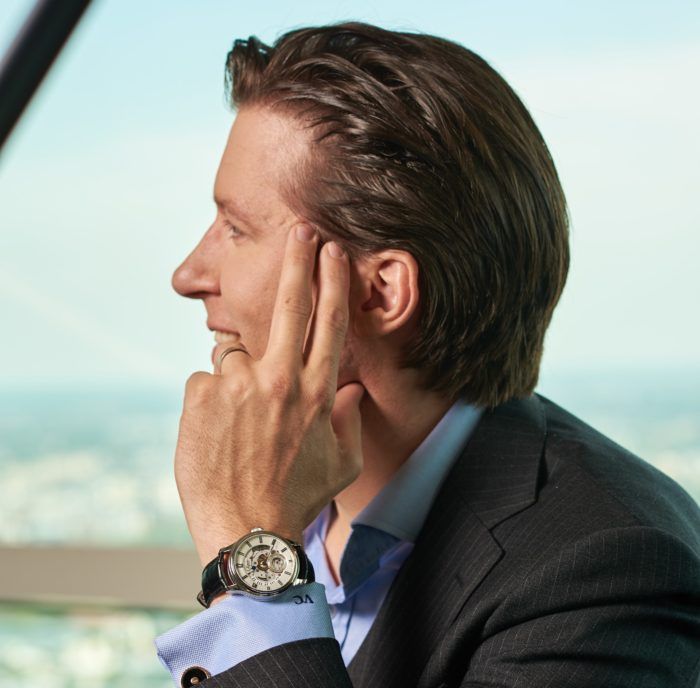 A: Clearly, you have specialised in playing the piano. Do you play any other instruments?

V: The piano has always taken the number one, and only, spot. I never devoted time, learning any other instruments. However, in my studio, I am able to replicate any instrument imaginable using my keyboard and drum-computer.

A: Recently, you became an ambassador for Chopin Watches. How did this come about?

V: I received a message from a good friend on Instagram, @WatchAnish to star in a promotional film for Chopin Watches. For the film, I decided to compose a special nocturne based on Chopin’s Revolutionary Etude, the inspiration for Chopin Watches’ latest timepiece. I approached Chopin Watches’ CEO, Michal Dunin with a recording of composition and everything developed from there. It’s been a wonderful journey with their team so far. I’m looking so much forward what is to come.

A: Clearly watches and music necessitate precise timing. Do you think there are other similarities between the two domains?

V: Oh absolutely, I call “Music the Gravity of Time”. Invariably, we experience music through our heartbeat. Music that is slower than our heartbeat we consider slow and vice versa. Undoubtedly, time and music go hand-in-hand.

A: In 2013, you were nominated for a Grammy, an indication of your widespread appeal. However, do you ever compose music for your personal enjoyment, knowing the resultant music is likely to only appeal to a much smaller, informed audience? The reason I ask this question is that Chopin Watches is not intended for the masses, but a relatively small number of discerning clients. Are there any parallels in your domain?

V: Yes, any composer would go through composing often dozens of works before any would see the light of day. I believe it is part of the musical journey and development of every composer. The smallest compliments are often the greatest to receive. I recently received a message on Instagram from a kind lady who mentioned her sleeping problems. She informed me that since she had started to listen to my EP “Sleeping Piano” and as a result her sleep pattern had returned to normal. It is these little things that mean so much. 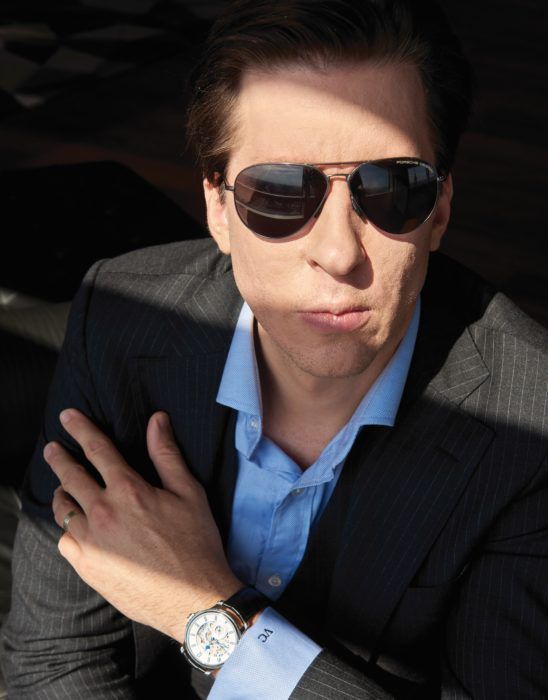 A: In watchmaking, we often look beyond the mere indication of time and focus upon the design and craftsmanship involved in creating a masterpiece. In the world of pianos, what are the factors which differentiate an ordinary piano from an exceptional piano?

V: A beautiful question. I have been fortunate to be close for many years as an artist and technician to Steinway & Sons Musical Instruments in Hamburg, Germany. Their pianos are simply of the finest quality in the world. Not because of their ‘secrets’ but by having the world’s greatest craftsmen working on their instruments with absolute dedication and pure love. It is the combination of sometimes small details which often distinguish a piano as excellent.

A: What are your objectives when you compose a piece of music?

V: There are no objectives other than to always embrace what I do. I feel my music just comes in careful layers, as if it had existed before, but requires to be re-born in a new lifetime.

A: How do you relax when you are not composing, playing or producing?

V: I love life outdoors and do frequent sports of all kinds. In the Winter months you will inevitably find me on a Snowboard in the Swiss mountains. And, when the weather permits, I derive most pleasure from one of the simplest, but most satisfying things in life – gardening. 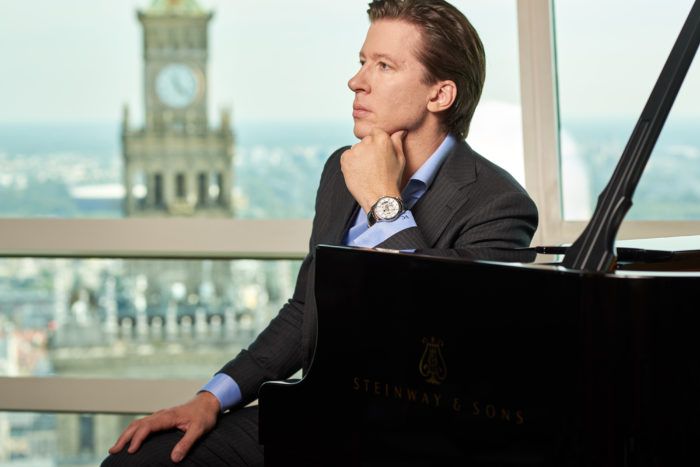 Despite possessing colossal talent, Vincent Corver exhibits a becoming modesty. While he is justly proud of his achievements, there is no hint of self-promotion.

My interview provided a fascinating insight into a world, hitherto I knew nothing about.

Perhaps, most pertinently, I was interested to discover those areas which are both relevant to watchmaking and music.

Firstly, craftsmanship appears to be of equal importance whether selecting a fine piano or a luxury watch. It is clear that a piano from the venerated firm of Steinway & Sons is the peerless result of time-served hands lovingly creating an object of beauty. Indeed, some years ago, I attended an event with the esteemed German firm and witnessed the incomparable sound of a grand piano played by an accomplished pianist. The rich tones of a Steinway can be attributed to the quality of materials employed. Having collected watches all of my adult life, the no-compromise creation of a Steinway resonates with me and I can easily liken it to the beautifully decorated bridges found on a fine timepiece.

Secondly, Vincent said something which I had never thought of before, but on reflection I totally understand. He remarked ‘invariably we experience music through our heartbeat. Music that is slower than our heartbeat we consider slow, and vice versa. Undoubtedly, time and music go hand-in-hand’. The regulating organ of a watch is often described as the ‘heart of the watch’, beating to a predetermined frequency and conducting the hands of time. Irrespective of whether it is music or horology, the behaviour of the heart is critical.

Lastly, despite my lacking any sense of rhythm and being unable to sing tunefully, I concluded our interview, recognising the importance of patience, skill and timing, qualities clearly relevant to Vincent and equally important to Chopin Watches.