Why? Technical insights into the making of the Chopin Op.10 No.12 timepiece - part II

The making of a movement

Frederic Chopin wrote most of his compositions for solo piano, however, some of his works are now performed by prestigious orchestras around the globe. In the world of watchmaking, there are no solo performances.

The motion of the hands on a watch dial, imparting the prevailing time with incredible precision, is the result of many movement parts working in concert. The part count of a mechanical movement can often exceed 200 components. Each movement part has its role and must be in tune with other components to ensure smooth, faultless operation.

Watches are typically either mechanical or quartz, albeit there are a few rare exceptions. Quartz movements incorporate a battery which sends energy to a quartz crystal. This crystal resonates 32,768 times per second which is measured by a small circuit and converted into a single pulse, advancing the hands once every second.

While quartz movements are accurate, cheap and simple to produce, they are considered by most discerning buyers as bland and devoid of craftsmanship.

In contrast, a mechanical movement is highly complex. Its creation is time-consuming, necessitating numerous production processes. Manufacturing tolerances are infinitesimal and much expertise is needed to realise a fine, reliable movement.

Nevertheless, a mechanical movement justifies its protracted creation. It brims with craftsmanship and is infused with emotion. Its regulating organ oscillates to and fro, pulsing with life. Jewels, pinions, pivots, springs and wheels play harmoniously for the delectation of the owner. Indeed, viewing these parts via an exhibition case back provides a fascinating spectacle for the inquisitive onlooker.

Similar to a house, a movement requires good foundations. This starts with the making of the mainplate (sometimes called the ‘base plate’, ‘bottom plate’ or ‘platine’).

Usually, the main plate starts life as a square section of brass. This is placed within a Computer Numerical Control (CNC) machine. Various tools are used, selected automatically by the machine, to carve intricate shapes into the brass. Usually the resultant brass disc, the mainplate, will feature holes and recesses to subsequently accommodate various parts, including jewels. The programming of the CNC machine is time consuming, often taking longer than the time necessary for performing the desired task.

It is imperative that the mainplate is made to exacting tolerances. If this component is not to specification, all other parts placed on top will be out of alignment and the watch will not function correctly.

When Chopin Watch created its inaugural timepiece, the Op.10 No.12, it turned to movement specialist Schwarz Etienne for assistance. This company has the necessary skills to both design movements and craft them to exacting standards.

Once the mainplate has been produced it provides a base for other components to sit upon. In order that these components are secure, a series of metal plates, termed ‘bridges’, are positioned above. Effectively the best way to consider the movement is to think of it as a sandwich formed of a mainplate, the components, e.g. the gear train, and, lastly, the bridges.

The bridges are usually made using a wire erosion machine. This method involves placing brass or steel blanks in water and then cutting them precisely with an electrified wire. This technique can make very fine components to minute tolerances.

The appearance of bridges

After the components are machined, they are ‘finished’ to remove signs of machining.

The Chopin Op.10 No.12 timepiece incorporates very unusual bridges. Each bridge features cursive text, replicating the composer’s words which he thoughtfully scribed on parchment. The engraved text is produced using a state of the art laser technique. The various replicated words are taken from the composer’s diary and voice his frustrations of the time.

Chopin, fiercely proud of his homeland, was eager to play a part in the November Uprising of 1831. The Polish Army, keen to thwart Imperial Russia’s territorial ambitions, mounted an unsuccessful attempt to rid Warsaw of enemy forces. The celebrated composer wanted to follow many of his compatriots in fighting against the tyranny of Imperial Russia, however, his poor health and the wishes of his parents prevented him taking up arms. The exasperation Chopin clearly felt at the time, witnessing the erosion of his nation’s sovereignty, was emotionally expressed in his diary and subsequently provided the inspiration for Étude in C minor Op.10 No.12.

It was important to Chopin Watch that the movement referenced this important episode in Chopin’s life, hence the bridges are embellished with his poignant words. Once the bridges have been engraved, they are passed to a specialist company and blasted with fine particulates of bronze in order to emulate the appearance of said parchment. Schwarz Etienne had to work closely with this specialist company, experimenting with different grades of bronze particulate until the desired finish was achieved.

Finally, the bridges are rhodinated, a type of treatment used to enhance corrosion resistance. 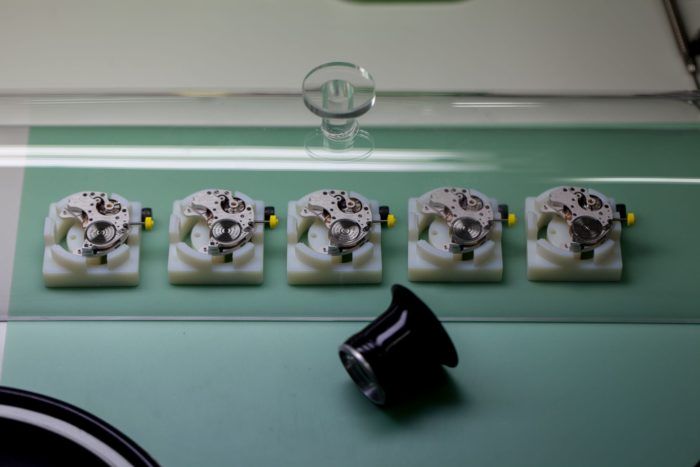 Bringing it all together

In order to secure the bridges to the mainplate, numerous screws are required. In addition, pivots, wheels and pinions are also needed for the filling of the aforementioned sandwich. Schwarz Etienne make these components using ‘profile turning machines’.

These machines hold long bars of brass or steel of various gauges within storage cylinders. Such machines are computer programmable and feed the desired bar into a collet. A series of cutting tools from the side, together with a milling tool from the front, cut the material into the desired shape.

Profile turning machines, similar to the previously mentioned CNC and wire erosion machines, are incredibly expensive. Moreover, to obtain consistent, quality components necessitates much expertise on the part of the movement specialist. Further reason why Chopin Watch entrusted Schwarz Etienne with making the movement for its inaugural watch.

Fine watches justify movements of a commensurate standard. A mechanical movement is the culmination of hours of effort and years of experience. Schwarz Etienne, founded in 1902, is a ‘Manufacture’, a term used to describe a company which makes its own movements. By collaborating with this Swiss firm, Chopin Watch is able to assure its clients that each component is painstakingly crafted and exquisitely finished. Indeed, the MSE 210 movement represents a delightful performance.